There are two special vespers services for local saints that may be of interest:

Vespers for Saint Petrock will be held at St Petrock’s Church, High Street, Exeter at 6.00pm on Monday 4th June. The bells will be rung from 5.30pm. 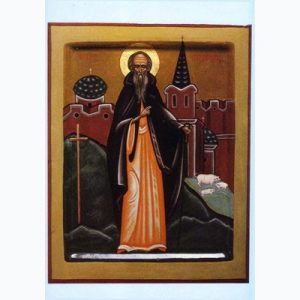 Vespers for Saint Brannock will be celebrated at St Brannock’s Church, Braunton at 6.00pm on Saturday 16th June.

All are welcome to attend!

The Parish AGM will take place on Sunday, March 11th, 2018, after the liturgy and vespers.
The venue will be confirmed after the liturgy or as soon as possible (it will not be at Silvania Hall as previously announced).
All members of the Orthodox Parish of the Holy Prophet Elias are welcome. Contact the parish secretary by email at hpeliasdevon@gmail.com with any questions, including to find out how to be added to the membership roll.

On Sunday the 25th February, the first Sunday of Great Lent, the parish celebrated the Triumph of Orthodoxy. Here are a few photographs of our parishioners in a procession with icons around the pretty garden at St Annes. 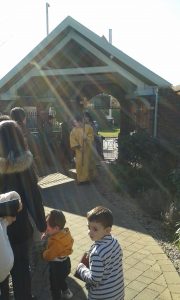 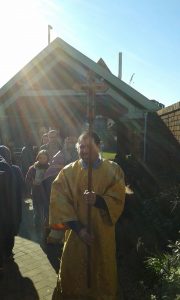 Where: Amory Building 316, University of Exeter

In this talk Dr Ruth Coates will consider the Orthodox doctrine of deification in the context of Russian religious thought, focusing on the last two decades of the Romanov empire: a period known as the Russian religious renaissance. She will suggest that the concept of deification–becoming gods–was widely adopted at this time as a religious response to the apocalyptic anxieties evoked by the revolutionary atmosphere of the period and the anticipation of the collapse of the autocracy. Nevertheless, the reception of the doctrine of deification did not follow a straightforward path from ‘school’ theology and patristics into lay religious thought, and its expression took a wide range of forms of varying degrees of orthodoxy. In her talk Dr Coates will explore the routes by which the deification concept reached the Russian religious intelligentsia and discuss the variety of uses to which it was put.

Please note that on Sunday 15th October many of the roads around St Anne’s Church will be closed for the Great West Run taking place in Exeter City Centre. The roads, including Blackboy Road and Old Tiverton Road, will be closed between the hours of 6am till 12pm, which will make access to St Anne’s for the Liturgy more difficult for those arriving by car.

Please click here to see the map of road closures on the Great West Run website for further details.

The University of Exeter Orthodox Christian Society is running an exciting series of lectures for the 2017/2018 Autumn term. Please click on the link below to see their poster and also check their Facebook page for further details and updates:

Our new website is now live! We are still tweaking it and learning how to use it, so do please be patient with us.