Archbishop Nikitas of Thyateira and Great Britain is to visit St Anne’s on Saturday 1 February to celebrate the Divine Liturgy, during which he will ordain Protodeacon Peter Scorer to the priesthood.  This is a great day for our parish as well as for Peter and his family, and we are looking forward to welcoming a good number of our parishioners, together with friends from further afield.

After the service there will be a buffet lunch in the Heritage Lounge at St James’s Park, the headquarters of Exeter City Football Club.  This is only 2 or 3 minutes’ walk from the church, and we will be able to use the on-site car park and toilets from 10.00am (the Liturgy is scheduled to begin at 10.30).

Thanks to a very generous donation the main part of the meal (a choice of savoury dishes together with wine/soft drinks) is being provided from outside sources, but for the sweet course we will be following our long-established parish tradition of ‘bring and share’.  Contributions for this may be delivered to the Heritage Lounge before the service — the entrance is clearly marked, and someone should be on hand to make sure they end up in the right place.

The Annual General Meeting of the parish will be held at Jury’s Inn, Western Way, Exeter, on Sunday 10 November at approximately 1.00pm, following the Divine Liturgy at the usual time at St Anne’s.  As none of the present parish officers (Parish Warden, Secretary, Lay Representatives &c) are due for re-election this time there should be no need for elections.  Minutes of the 2018 AGM (actually held earlier this year) and the Agenda for this meeting will be circulated nearer the time.

A significant item will be discussion of the present position of our parish with regards to the effectual closure of the Archdiocese of which we have been a part for many years.  We need to decide whether the parish wishes to follow Archbishop John and join the Moscow Patriarchate, or to remain under the Patriarchate of Constantinople and Nikitas, Archbishop of Thyateira.

All whose names are on the Parish Electoral Roll are entitled to vote at the Meeting. You may wish to bring sandwiches; coffee and tea will be provided.

On 7 September an Extraordinary General Assembly will be held in Paris.  This meeting has been called by our Archbishop John of Charioupolis, the head of the Churches of Russian Tradition under the Ecumenical Patriarchate, to which our parish belongs.

Representatives, both clergy and lay, from about 130 parishes throughout Europe will gather to discuss and vote on the future of our Archdiocese.

This means that the Archdiocese which has existed in Western Europe as a self governing body under the Ecumenical Patriarchate since 1931 would cease to exist.  This is deeply upsetting for members of the Archdiocese who regard themselves as free from all national prejudices, and have followed closely the decisions taken at the famous Russian Sobor (Council) of 1917-8, which allowed for the free election of their bishops and full participation by the laity in all decision making.  Many have seen the Archdiocese as laying the foundations for an independent Orthodox Church in Western Europe.

Since then, many attempts have been made to find some way of keeping the Archdiocese united and intact.  Appeals have been made to the Ecumenical Patriarchate to reverse its decision.  Other Churches have been approached and been asked to take us under their protection.

The only Church which has so far offered to accept the Archdiocese has been the Moscow Patriarchate.  Our Archbishop John has been negotiating with representatives of the Moscow Patriarchate, which has come up with a detailed plan, which they say will guarantee our complete independence and preservation of our current statutes.  However, the final choice for the selection of any bishops would lie with Moscow, and we would be required to commemorate the Patriarch of Moscow at all our services.

Our clergy and delegates from this parish will be asked to vote at the forthcoming Assembly on whether to join the  Moscow Patriarchate, or to seek some other solution. One of these would be to remain as an independent church group, temporarily not attached to any of the Patriarchates.

The clergy representing our parish will be Father Patrick Hodson and myself. Our two lay delegates are Celia Olsson and Martin Olsson.  If you have any thoughts or questions about the future of our Archdiocese, or about our parish, please contact them, or write or phone me.

Please note that the Liturgy planned for 8th June in Coombe Martin will now be on June 22nd.

Vespers for St Brannock of Braunton will be served at 6 pm at St Brannock’s Church, Braunton. There will be no vespers served at St Anne’s Chapel that evening. 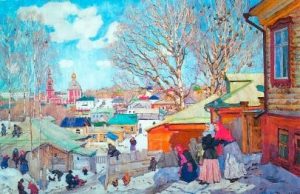